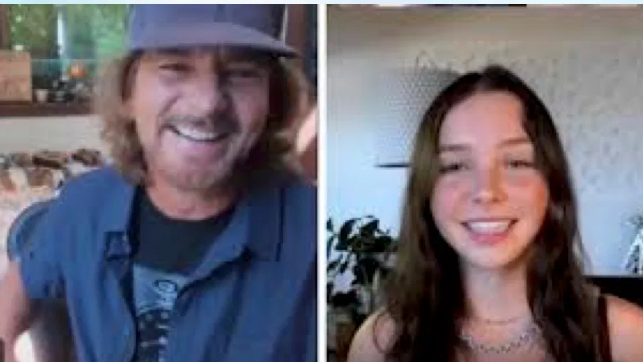 Three years ago, the shocking suicide of Soundgarden’s frontman Chris Cornell left hardcore fans stunned, bandmates devastated and family members feeling crushed. Today, Cornell’s 20-year-old daughter Lily has discovered a way to help cope with the personal loss, deal with her own mental health issues, and those of others who are underwhelmed by a dearth of support and mental health resources.

Related: “5 Chris Cornell Covers to Give You The Feels”

Lily Cornell Silver launched a new IGTV series in July, Mind Wide Open, where she interviews medical professionals, celebrities, and musicians to discuss a myriad of mental health challenges. Her mission is to amplify conversations regarding depression, anxiety, grief, trauma, etc. while dismantling the stigmas attached to them. The young college student’s first guest was Dr. Laura van Dernoot Lipsky, author of several books on trauma and a founder of the Trauma Stewardship Institute.

Another recent Mind Wide Open guest, Guns N’ Roses bassist Duff McKagan, praised Lily in a Rolling Stone magazine interview, stating: “Lily has taken the very brave step of exposing her own ups and downs with mental health and carrying forward a message and public conversations with others. This public forum of Mind Wide Open is a brilliant dive into the real-time realities and solutions for us all to hold onto.” During the episode featuring Duff McKagan, the pair developed constructive dialogue on panic attacks, depression, and substance abuse problems, which is often a form of self-medication accompanying these issues.

As a person who grappled with anxiety, grief, and PTSD her whole life, Lily continues to draw inspiration from her late father. Retrieved from the family archive, Mind Wide Open is actually a phrase from lyrics written by Chris Cornell. According to Lily, she and her father frequently discussed their experiences with mental health, adding that Cornell taught her breathing exercises and suggested reaching out to people for support. She admitted that those father-daughter conversations were really a matter of him “talking her down.”

Encouraged by the responses to her first episode, Lily said in a recent Rolling Stone interview that the comments have filled her with so much joy, and being able to bring validation and hope to others gives her a ton of hope which is particularly important during these unprecedented times.

She also offered tips for self-care management based on routines that work for her such as meditation, listening to music, eating properly, taking medication if required, venturing outside, finding something that brings joy, and a reason to get out of bed.

Lily has plans to chat with a broad set of guests, including medical experts to address bipolar disorder, emotional intelligence, psychology, and wellness, as well as public figures from pop culture, music, and peers willing to share their own stories. She has made clear her desire is that people from all backgrounds will benefit from her series.

In her own words of wisdom, Lily stated after her first episode, “I would like to emphasize the fact that we are all experiencing a collective trauma right now, whether or not people know it. I think this is one of the few times in history where it’s affecting literally every single person on the planet. This pandemic and structural supremacy are deeply traumatic. So, I want to help provide vocabulary around that trauma and let people know that what you’re feeling is not crazy. No one’s alone in this. We’re all experiencing a similar thing.”

0 comments on “Exploring the “Mind Wide Open” with Lily Cornell”