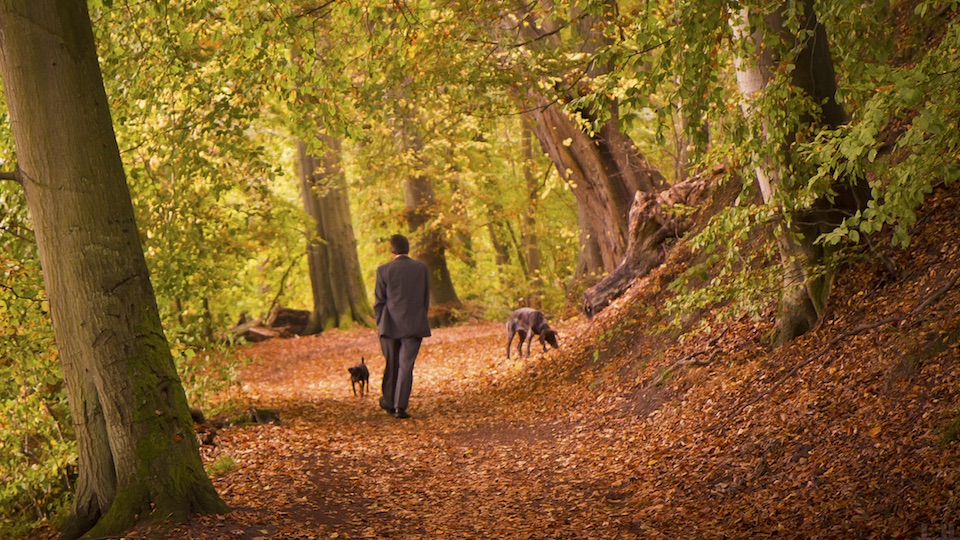 In the 5th century B.C.E., Zeno of Elea proposed, essentially, that motion was not, in fact, real, that the distance between two points is ultimately infinite and therefore a destination can never truly be reached. A convoluted concept that Diogenes the Cynic, a fellow Greek philosopher, nonetheless used a simple method to disprove. He stood up and walked across the room. Solvitur ambulando, Roman theologian and philosopher St. Augustine would remark centuries later. It is solved by walking. No matter how complicated the problem, the answer lay in practical action.

As it turns out, walking is both a practical action and complex matter for the brain. According to an article titled “Thinking, Walking, and Talking: Integrating Motor and Creative Brain Function,” published in the journal Frontiers in Public Health, the parts of the brain that allow for innovation and other complex functions developed at the same time that we developed our ability to walk. What’s more, the left, logical half of the brain controls the right side of the body, and, in turn, the creative right side controls the left side of the body. So by consistently putting one foot in front of the other, we allow the two sides to communicate with each other and to work in tandem.

As a result, walkers tend to churn out fresh ideas. Stanford conducted a 2014 study on the effects of walking on creativity. The study, which observed 176 students both sitting and walking, concluded that the students produced 60% more creative output when they were walking than when they were sitting.

No doubt this is why countless writers and philosophers alike have written about the importance of walking to their creative output. In his memoir, A Moveable Feast, Ernest Hemingway, wrote, “I would walk along the quais when I had finished work or when I was trying to think something out. It was easier to think if I was walking…” Nietzche believed, “All truly great thoughts are conceived by walking.” More contemporary innovators such as Steve Jobs insisted on conducting his meetings with colleagues on foot, and Nikola Tesla would walk for hours in a city park to stimulate his ideas.

Perhaps most famous for extolling the virtues of walking was Henry David Thoreau, who gave two lectures on the topic that eventually became a manifesto simply titled, “Walking.” He famously did his ambling deep in the woods, believing strongly in the healing “tonic of the wilderness,” and that “nature is just another word for health.” While there is research to suggest that nature walks in particular lower cortisol and blood pressure, and reduce negative thoughts, Marily Oppezzo, co-author of the Stanford study insists that, “walking on a treadmill in a small, boring room still had strong results.”

And what of those of us who don’t plan to found a school of philosophical thought or write the great American novel? Well, three of the Stanford study’s four experiments tested participants’ “divergent thinking,” which is “a thought process or method used to generate creative ideas by exploring many possible solutions.” This is at the heart of creative problem solving, which can be used to generate many possible solutions to the problems in our lives.

Walking also provides enough physical benefits for Dr. Thomas Frieden, former director of the Centers for Disease Control and Prevention, to dub it, “‘the closest thing we have to a wonder drug.” As with any form of moderate exercise, when practiced at least 30 minutes a day, five times a week it will help “protect against dementia, peripheral artery disease, diabetes…colon cancer, and even erectile dysfunction.” Walking in particular, though, has been found to reduce the risk of cardiovascular events, and even the risk of death, by more than 30 percent in both men and women alike. It’s purported that women who walked for at least one hour a day had a 14% lower risk of developing breast cancer than those who walked fewer than three hours a week and that walking can actually lessen the effects of weight-promoting genes.

Unlike more strenuous forms of exercise such as running and jogging that can exacerbate or even cause joint pain, walking eases pain related to arthritis by lubricating the joints and strengthening the surrounding muscles. These benefits increase in direct relation to increased distance, speed, and frequency.

Proper technique ensures that you get the most from your walking routine. Be sure to look ahead of you instead of at the ground. Abs should be slightly contracted, and back straight but otherwise the upper body should remain relaxed, while feet should press from heel to toe in a rolling motion.

So, perhaps Zeno of Elea was right and we will never actually reach our destination. It seems worthwhile to start a journey toward one anyway, a journey best made on foot.