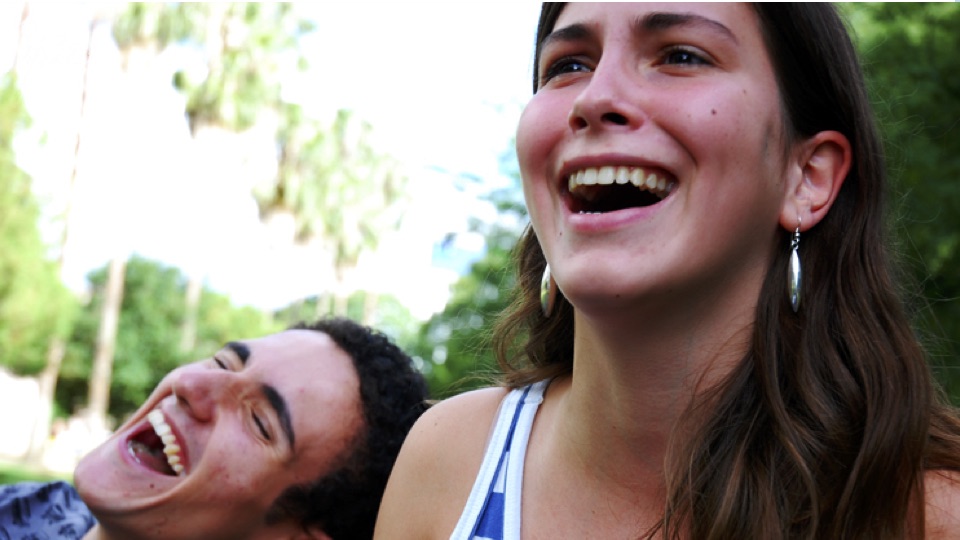 They say laughter is the best medicine, and those who practice “laughter yoga” attest to the practice’s benefits for mind, body, soul, and spirit. Far from deepening your Downward Dog or contorting into Cat-Cows, laughter yoga is a stress-relieving, immune-boosting activity that focuses on feeling good through laughing.

Laughter yoga was founded in 1995 by an Indian physician Dr. Madan Kataria who was researching the health benefits of laughter for a magazine. Through his studying of the topic, he realized that if laughter was so good for people then why wasn’t it a part of people’s daily routines? Starting small, Katarina gathered a few people in a park to tell jokes and funny stories in order to make each other laugh. As passers-by saw the group, more people joined in and numbers grew swiftly. After a few weeks of meeting regularly, however, the gathering began to grow tired of hearing the same jokes. Kataria then turned to something different: laughing without humor. He developed a series of laughing exercises and combined these with yoga breathing and stretching techniques, focusing on deep diaphragmatic breathing and extended exhalation. Hasya yoga (laughter yoga) was born.

Since its humble beginnings as a park-based comedy circle, laughter yoga has grown into a global movement with more than 5,000 laughter clubs spanning 53 different countries. Numbers like these are nothing to laugh about. Then again, if you’re a laughter yoga convert, they likely are, as most things tend to be.

Part of what makes laughter yoga so interesting, and for many, so strange at first, is the practice’s use of fake laughter in its exercises. “Fake it till you make it,” laughter yogis often say, believing that forced laughter will soon develop into the real deal with the help of the exercises and a group setting.

Beginning most sessions with a series of handclaps and chants of ‘ho ho, ha ha ha,’ participants are encouraged to leave their inhibitions at the door and learn how to laugh without reason. Laughter greetings between group members follow, and then the laughter exercises blended with deep breathing techniques come into play. These help to warm up the cheek muscles, lungs, and diaphragm in order to help mimic the deep sense of warmth we feel when we experience cheek-straining, belly-aching laughter. Even those who dread the idea of forced fun will come out of a laughter yoga session feeling revived, uplifted, and in a much better mood to face the world.

Myriad studies have demonstrated the strong links between laughter and the release of endorphins, increased muscle relaxation, decreased cortisol, and improved cardiovascular health. Moreover, studies have repeatedly shown that laughing promotes mental, physiological, and even spiritual wellbeing. This was most famously seen in the 1960s when American journalist Norman Cousins was able to combat a degenerative disease through watching Marx Brothers movies and other comedy films. Cousins found that after just ten minutes of induced laughter, he was able to achieve two hours of painless sleep. Patch Adams is another well-known name, the real-life doctor whose life inspired a Hollywood biopic, who turned to laughter in order to heal his patients.

Science, statistics, and research papers are redundant in the face of a belly-aching laugh though. We know how good laughing feels because we just do.

This is the ethos behind laughter yoga. Even if you have to force the laughter at first, the very act lifts your mood in no time at all. Kataria found that laughter has two sources, the mind, and the body. As adults, we use reason and judgment to determine what is funny and what isn’t. Children, however, who laugh more frequently, do so from the body as an instinctive, compulsive response when they’re playing. Laughter yoga, therefore, seeks to bring out the inner child in its followers and encourages the playfulness we all once had. The exercises may trick the mind into not recognizing the difference between real and fake laughter, but the results are just as joyful.

We can all use more laughter and joy in our lives and the positive boost laughter yoga gives its followers is like a bottomless elixir of happiness. Whether taking part in a local workshop or trying an online video at home, you’ll soon see how laughing with yourself and for yourself makes the world a little brighter, if not a whole lot funnier. Try it, it’s (more than) a laugh a minute.

0 comments on “The Joys (and Healing) of “Laughter Yoga””