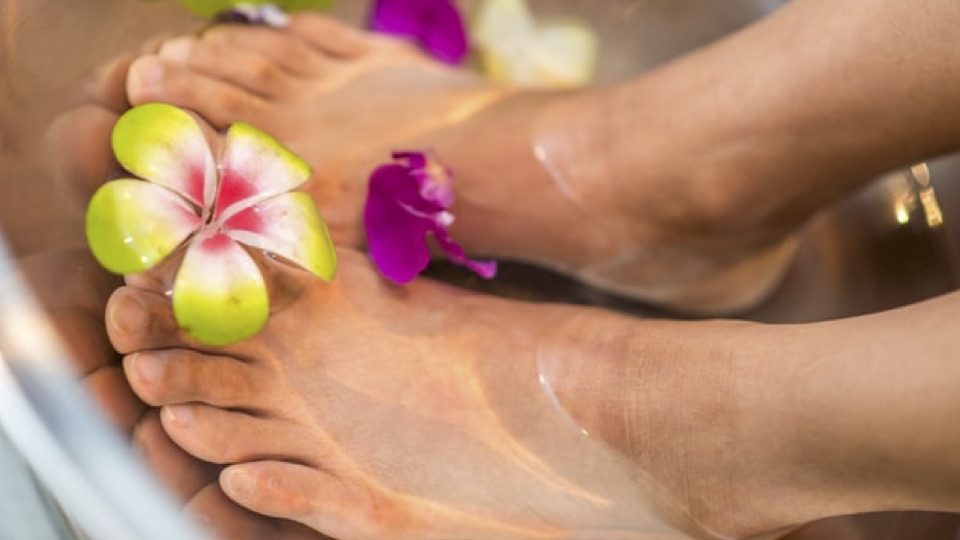 Are you starting your day with your “best foot forward”?   You would be if you started that day with a little reflexology. This means working certain pressure points on your feet (and hands, if so inclined).

Letting your fingers (or someone else’s)  do the massaging from the ankles down might just make everything from the ankles up feel a whole lot better. A reflexology session can readjust not just how your feet feel, but how all the organs and body systems that those hard-working feet are connected to, work.

You’ve probably seen one of those colorful annotated foot maps in a shop window or magazine.  It outlines a healing map: your feet may be the helping hand your whole body needs. 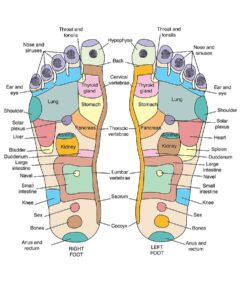 Reflexology is based on the belief that there are 10 distinct areas that can be mapped on the foot corresponding to various organs, systems, and energy circuits in the body. When these areas are massaged using pressure and massage, powerful healing results. 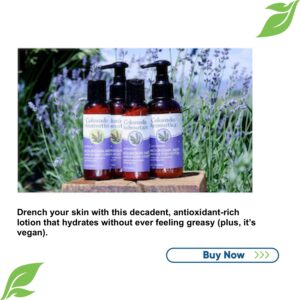 According to the International Institute of Reflexology, every body part that lies within a zone can be accessed via a reflex point on the feet (and/or hands). For example, working between the second and third toe will bring you to the “eye reflex” point.  Indeed, pressure applied to the toes can help with a migraine, neck pain, and often sinus congestion, while those gut issues of yours might call for a little manipulation of the mid-foot. It makes anatomical sense since reflexology is stimulating the nerve endings of the feet, which connect with the spinal nerves and their corresponding organs.

Stress, both mental and physical, also respond to this therapy as well as unresolved chronic pain and hormonal issues.  Additionally, it’s often used to improve sleep patterns. And some research indicates that a series of reflexology treatments can help lower systolic blood pressure.

Aside from its surface similarity to acupuncture and acupressure, how does reflexology differ from these and other alternative healing methods such as chiropractic, and therapeutic massage?  First, reflexology is refreshingly simple, gadget-free, and a highly efficient all-encompassing treatment because all organs, glands, and the skeletal system can be stimulated through the feet and hands. In much the same way as acupuncture, it works to unblock the energy meridians.  The difference?  Reflexology uses sustained pressure, not the broad strokes, associated with classic massage. Finger-thumb-hand pressure is applied to specific reflex points which are held briefly before being released.

A system that is soothing, non-invasive, and backed by centuries of practice. Yes, centuries.  There is evidence suggesting that early forms of reflexology-like practices were documented in ancient Egypt and in Traditional Chinese Medicine; the feet have always been viewed as a gateway to good health.  North American Indian tribes in the late 1800s also practiced a type of zone therapy.

In 1913, an American, Dr. William Fitzgerald was the first to report on the effect of therapy using the foot’s reflex points.  His theory was further developed in the 1930s and 40’s by nurse-physiotherapist Eunice D. Ingham, who was the first to identify and map so-called “reflex points.” Since then, there have been many different maps created, some more detailed than others but they are largely in agreement. And practitioners use them as guides to which areas to investigate.

Interested but don’t have a trained professional nearby? Why not treat yourself to a little self-guided reflexology?

1) First, consult a foot map to acquaint yourself with the “reflex points.” Plan on a 10-20 minute treatment.

2). Relax the feet, one at a time, with simple techniques. Pressing and squeezing, and alternatively lightly slapping or gently kneading the feet works.  Finish by pressing and holding your thumb on the solar plexus point of each foot for 5 to 10 seconds each. This point is located below both the third toe and the ball of the foot. This point can be a powerful reliever of stress.

3). Crawl your thumb slowly up from the base of the heel to each toe, then press the reflex points here with the outer edge of your thumb or tip of your forefinger: Repeat on the other foot.

4) End with soft strokes.  Lightly run your fingertips down the tops, bottoms, and sides of each foot in a sweeping motion, lightly touching the skin. Repeat several times. Don’t hurry. This is a balm for the sole… and the soul!

Note: Perhaps a reflexology mat or foot massagers that takes the place of your hands speak to you?  There are many versions of these tough plastic mats featuring uniform bumps with dozens of smaller bumps that when walked and stood upon, are said to improve the flow of qi (energy) throughout the body. Also, there are foot massagers of various designs and sizes available that replicate (somewhat) some of the rewards of reflexology. Some may include features such as heat tapping, air compression, and washable inserts.

Photo by Rune Enstad on Unsplash