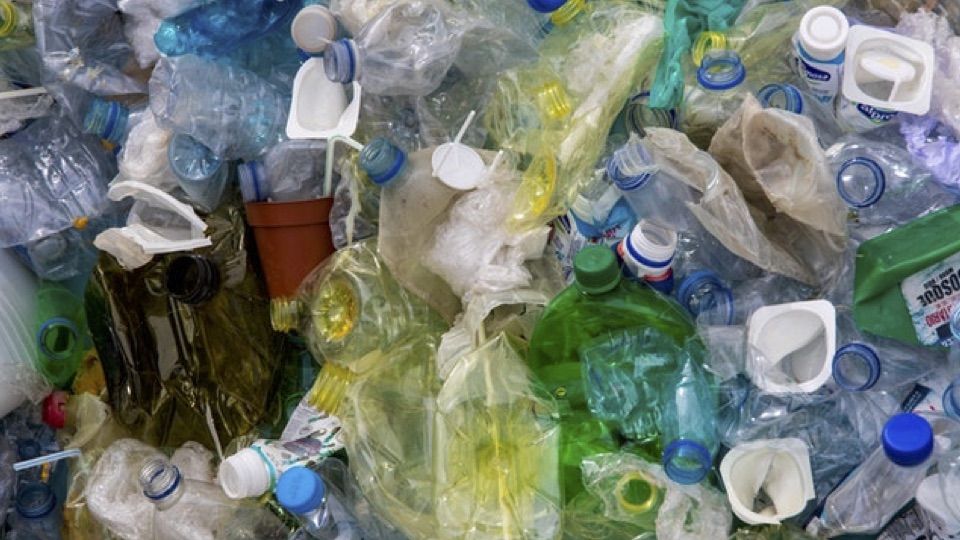 More than 300 million tons of plastic are produced annually, and roughly half of that is produced for single-use — meaning, one and done and discarded. And the price of producing these plastics may be even more harmful than the plastics themselves, says the Environmental Working Group. This problem has been made worse by the pandemic and increased attention to food safety. And it’s not going away. Monumental plastic waste is going to our landfills, some of which make their way into rivers and oceans. In fact, around 8 million tons of plastic pollution enter the ocean every year, where it endangers marine life, pollutes coral reefs, and ultimately — breaks down into trillions of tiny microplastic pieces which make their way back into seafood and drinking water. In 2019, the World Health Organization called for research into the potential impacts of microplastic pollution on our health. It is tragic and unnatural.  In the words of the oceanographer Capt. Charles Moore, (who discovered the Great Pacific Garbage Patch in 1997), “Only we humans make waste that nature can’t digest.”

And we humans, all of us, are part of the plastic pollution problem. If you left your reusable mug at home and need a drink, you will probably pick up a plastic bottle of water. And throw it away or recycle it an hour later. Multiply that by a million and weep.

Enter Coca-Cola’s “Plant Bottle” and other possibly promising new alternatives to traditional petroleum-based products known as “bioplastics.” Coke’s Innovative bottle is 30% sugar cane and 70% traditional plastic. It only accounts for 7% of their global supply but they aren’t alone.  It is projected that the petroleum use for the production of plastic will decrease by 15–20% by 2025, thanks to these newcomers.

By definition, bioplastics are materials produced from renewable biomass sources, such as vegetable fats and oils, corn starch, straw, woodchips, sawdust, recycled food waste, and algae.  Sounds good so what are the cons?

Some bioplastics are carbon-neutral, some are not. Some can be conventionally recycled and some cannot. And some are pricey for the average pocketbook.   Bioplastics, in other words, are a promising but imperfect solution to our growing environmental recycling woes.

Imperfect because many experts like the Pew Charitable Trust believe the solution to plastic waste mainly lies not in developing better bioplastics, but in overhauling the world’s economy to recycle far-greater quantities of plastic than currently are being reused. If its recommendations were adopted, the Pew report says, plastic waste could be reduced by 80 percent.

But that’s a silver bullet. Right now we have plastic and bioplastic

First off, what the heck is this thing called plastic anyway? The term applies to any moldable synthetic substance made from organic polymers. These days, conventional plastic is made from fossil fuels and is a product of the oil and gas industry. Plastics are made of cellulose, coal, natural gas, salt, and crude oil through a process of polymerization or polycondensation. The first plastic soft drink bottle appeared in 1973 and we’ve been buying them ever since.  While the choices keep changing, choosing the better if not the best materials (is glass available, or a reusable container from home?) should be our eco-conscious thought, remembering that giving unnecessary packaging of any type the thumbs down is always best.  But when plastic is your only choice, here are the pros and cons of each type of bioplastic being used in bottles, cups, straws, and take-out containers on the market today.

PET (polyethylene terephthalate) is a plastic derived from crude oil and natural gas. And minimally dependent on world oil supplies. Reusable and recyclable. So-called Bio-PET bottles are chemical cousins to PET but contain a percentage of plant-based ethanol. They are not carbon neutral and take just as long to break down in the landfill as conventional plastic. PET products are biodegradable, under certain conditions.

PLA and PHA:  The two most commonly used bioplastics are PHA, short for polyhydroxyalkanoate, generally made from sugars that are grown from algae, and PLA, for polylactic acid, which is made from the sugar found in crops like corn and sugarcane. PLA is a tenth the cost of PHA and so is more widely used for disposable cutlery and a variety of packaging. PHA is used as a coating for the inside of paper cups and medical applications. This one is biodegradable but more costly than other bioplastics. PLA can be safely discarded anywhere and is biodegradable under certain conditions, but regular recycling bins may not recognize it and reject it. Similarly, PHA is compostable but may be rejected at conventional recycling facilities.

Still confused?  Sustainability is what counts. Here are 3 key terms to look for:

BIODEGRADABLE:  This plastic can be broken down by fungi or bacteria into water, carbon, and other items found in nature in weeks or months under suitable conditions

COMPOSTABLE: The plastic will break down in a compost pile just like regular organic materials into non-toxic elements thanks to microorganisms, humidity, and heat.

OXO-DEGRADABLE: This plastic has been treated to break down rapidly into microplastics. Downside and danger?  It does not involve molecular change and deprived of oxygen it could release methane, a potent greenhouse gas.

And lastly, another sustainability issue to consider says the Yale School of the Environment: the sugars used to make bioplastic often come from transgenic crops sprayed with herbicides and pesticides, crops that take land out of production that is needed to feed a growing global population. So, sadly, the search for the perfect plant-based bottle goes on.

0 comments on “Bioplastics: The Promise, The Problems”