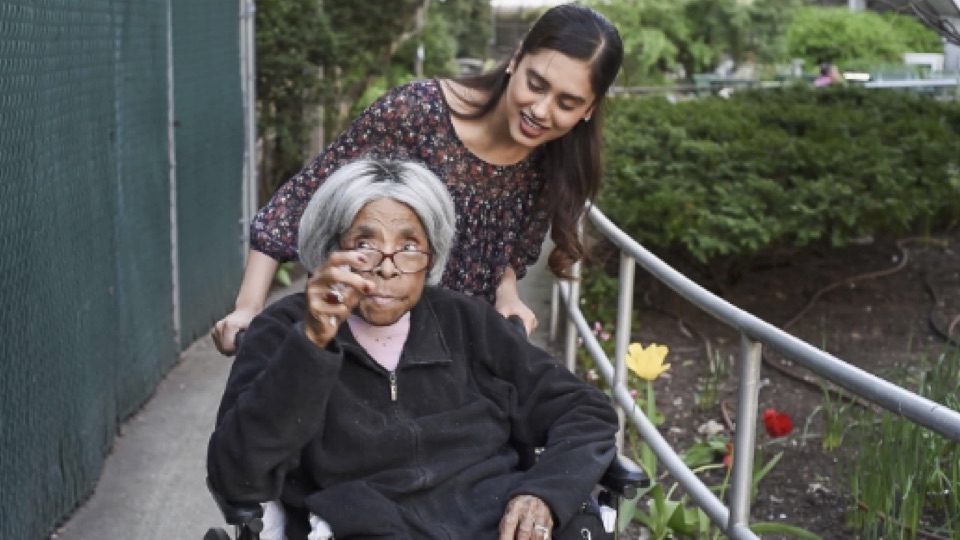 Editor’s Note: This is a wonderful, insightful post from our friends at Kindness.org who graciously let us repost their original content.  Enjoy.

Recent Columbia University graduate and kindness.org Citizen Scientist Lubna Kabir has spent the last several months as an intern at The New Jewish Home, a Manhattan elder care facility. In her role on the sixth floor, which specializes in care for residents with dementia, she has met and bonded with 93-year-old resident Dorothy McSheen. Their relationship has played an important role in shaping Lubna’s passion for intergenerational kindness.

Lubna finds Dorothy reading a newspaper alone at a table in the common room. “Hi Dorothy, do you remember me? It’s Lubna.” Dorothy says a friendly hello, but doesn’t seem to remember her today.

It’s one of the first nice afternoons of spring, and Lubna asks Dorothy if she’d like to go down to the courtyard. “Yes, that’d be all right. I’m dressed for it,” Dorothy says, zipping up her sweater. Lubna helps her lower the footrests of her wheelchair and they head to the elevator. Dorothy wheels herself forward, as Lubna lightly guides her from behind.

The two have been getting to know each other over the past few months as Lubna, the Deep-Knowing Intern at The New Jewish Home (TNJH), documents preferences and experiences of the residents. Her work helps provide nurses, volunteers, and other staff at the home more context to the needs of those they care for.

Down in the courtyard, Dorothy pulls out a flyer for the creative writing group she participates in and begins reading a poem transcribed on it about a flower. She reads slowly, lyrically. Lubna listens intently, and then asks if Dorothy knows who wrote the poem, to help her with what they call a “brain stretch”. Together, they reflect on the poem’s meaning. “It’s showing you when you’re given a flower, it’s not the size, but it’s the thought, the kindness and love,” Dorothy says.

“Exactly,” Lubna agrees. “Like with any gift, it doesn’t matter how much it costs.” Dorothy is the resident she feels she has connected with the most during her time at TNJH. “You’re such an influential and wise resident,” she tells her. “You’re the one who makes me look forward to coming here every week. I love learning from you, you’re like my teacher.”

“Well, I’m glad. And when you go to the hospital to become an intern,” Dorothy replies, remembering Lubna’s goal of becoming a doctor, “you’ll be able to say you have that know-how and that ability. You give the old people a chance to think and to know they’re gonna get good care.”

Initially inspired to work with the elderly after reflecting on her relationship with her own grandmother, Lubna says her internship at TNJH and learning of the rich histories and significant roles of the residents there has solidified her desire to advocate for people reaching their later years. “These are things that people don’t really think about when they think of old people. They don’t really consider what that person’s entire life experience was about.”

Lubna is passionate about fighting the stigma of aging, and its automatic association with physical ailments, memory problems, and other challenges.

Elderly people “have a lot of wisdom to impart to younger generations and we should take time to listen to them. Just listening is an act of kindness.”

As Lubna walks home from the nursing home each week, she gets a rare moment of quiet reflection. She finds respite from her busy schedule while processing the stories she’s heard from residents that day, and considers how they relate to her life. “I can see myself and my own family in the elderly people I work with,” she says. “I think it’s important for us to respect the elderly as people who are still capable of making a difference in the world and being agents of change and wisdom.”

0 comments on “Listening Across Generations”