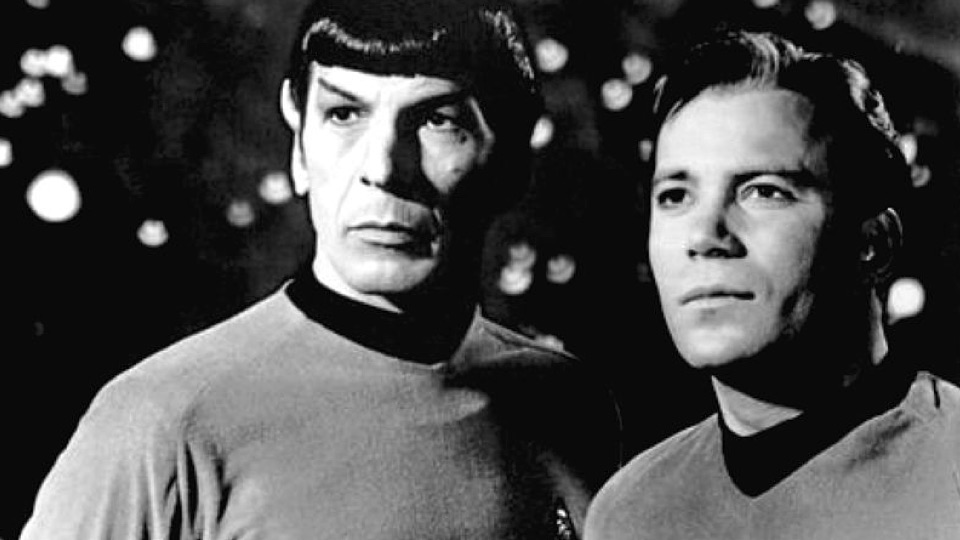 Those who know me know of my undying love for the cheesy, overacted, overheated slice of TV heaven that is Star Trek (the original series). I vividly remember catching the very first episode (my parents were yelling at me to come downstairs to welcome my sister home from college and I was all like, “Yeah, later – there’s a cool alien on the TV”). I even built (badly) a plastic model of the Enterprise.

To this day, and having seen every episode multiple times (#nerd), I appreciate the storylines, characters, and vision that Gene Roddenberry gave us of the future. One of my ultimate fangirl moments was riding in an elevator with William Shatner. Star Trek has stayed with me and helped shape my worldview.

There are some moments that are worth remembering as we navigate our lives. So excuse me as I beam myself up to share some helpful Life Lessons from Star Trek.

In the episode, “Return to Tomorrow,” Kirk, Spock, and some random crew babe are asked to exchange bodies with superior disembodied aliens in order for the aliens to use them to build new “bodies” for themselves. It’s a gamble and naturally, everyone has an opinion. But Kirk makes a plea that the whole point of their mission is to engage with fantastic, out-of-the-box moments. The key phrase of this speech is, “Risk…is our business.”

What are you holding back from? Because it can’t be any scarier than putting your consciousness inside what looks like patio decorations from the ‘70s.

STAY OPEN – EVEN IF YOU THINK YOU KNOW IT ALL

Kirk has been bitten by the Mogatu – a ridiculously fake creature rightfully spoofed by Will Ferrell in Zoolander. Nonetheless, he’s dying and the only thing that can save him is a local witch woman. She uses a “Mako” root. Despite being a hardcore medical man, McCoy is sufficiently intrigued and wants to know more. Be like Bones: stay open to the weird and be willing to learn.

The final episode of the series ranks as perhaps one of the most “cheese-tastic” of them all. In “Turnabout Intruder” a jilted lover of Captain Kirk’s “exchanges” bodies so she can take over command. It’s nuts on multiple levels (not the least being one scene where “Captain Kirk” is delicately filing his nails in his cabin), but there’s a point. Once Spock figures out what’s up, he has to convince the rest of the crew that the apparent Captain is not who he seems to be. Needless to say, the concept seems outlandish. Gradually, Fake Kirk’s behavior makes them question what seems “real.” At one point in the episode, Spock speechifies about how the crew is trained to accept many odd things that seem impossible. Do the same.

BE WILLING TO CHANGE COURSE

One of my favorite episodes is “The Doomsday Machine.” The Enterprise encounters a wrecked starship, one that’s fallen victim to a huge planet-killing device. They rescue the captain, Commodore Decker. At one point, Spock decides to veer off and alert Starfleet to the danger. He knows that the ship cannot combat the Planet Killer alone. However Decker, now temporarily in charge of the Enterprise, stubbornly insists on staying and fighting a losing battle. The scene is riveting and Spock’s logic is sound: in impossible situations, it’s a good idea to humble yourself, pull back, and regroup. Decker’s insistence on “full speed ahead” proves tragic. Don’t be a Decker.

NEVER BE AFRAID TO ASK QUESTIONS

“Amok Time” is epic, if only for the awesome “fight scene” music. I want this to be my ringtone.

Spock is essentially in heat and beams down to Vulcan to get his freaky-deaky on. He brings along Kirk and McCoy, who are getting their first glimpse of Vulcan culture. The first person they encounter is the imposing “T’Pau,” who is roughly the equivalent of Queen Elizabeth II, the Pope, and General Patton. You’d forgive them for being a little intimidated. Nonetheless, at one point, McCoy – in his genial Southern accent – asks, “Ma’am, I don’t understand…” He respectfully poses a question. No matter how out of your depth you may feel, a polite question or two is always OK. It’s about learning and increasing your understanding of things.

Hopefully now, you have the equivalent of a spiritual “Tricorder reading” to help better navigate the next adventures in your life. So… “live long…and prosper.”