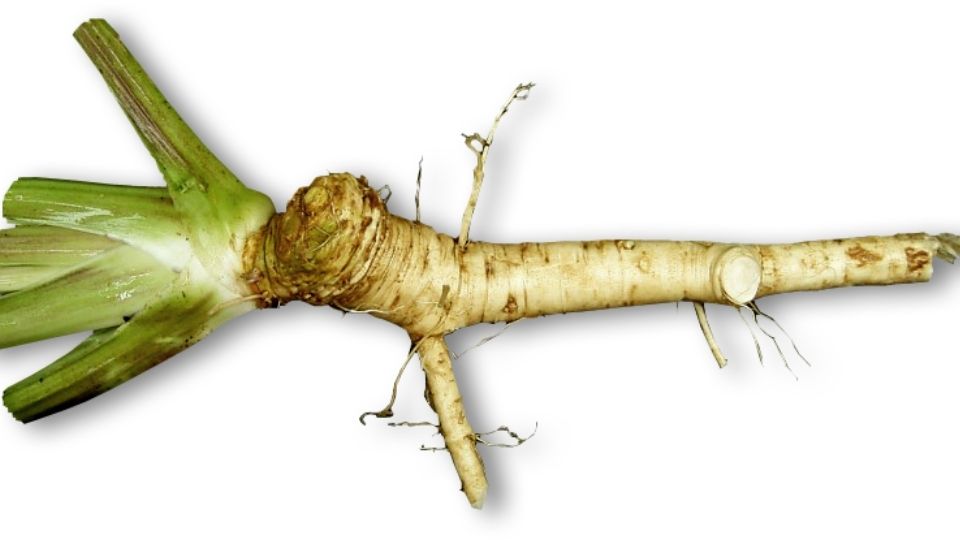 Hotcha cha! Americans have an insatiable craving for hot stuff. 56% of all American households have some kind of hot sauce on the shelf. But there’s lots of culinary real estate beyond salsa, wasabi, and hot sauce.

Horseradish (which simply means “large root”), for example. If you’re into the tingly and curative in your kitchen, that sassy-tasting root offers extensive health, culinary and live-longer benefits that wildly outpace anything Tabasco can offer.

This largely sidetracked root vegetable (a member of the mustard family) has quite a pedigree. The Egyptians used horseradish as far back as 1500 B.C. Greeks used it as a kind of Ben Gay rub (as well as an aphrodisiac). It was on the Passover Seders table as one of the bitter herbs.  In a precursor to Sudafed, horseradish syrup was a widely used expectorant cough medicine. You name it, horseradish as a salve, syrup, tea or poultice probably was used as a cure for something. During the Renaissance, horseradish use spread from Central Europe to Scandinavia and westward.  By the 1600s, the British were eating their beef and oysters with it. The root with the kick was even grown at inns and coach stations, and used to make pick-me-ups for weary travelers. Early settlers brought horseradish (along with porridge and pot pies) to North America. Today, approximately 6 million gallons of prepared horseradish are produced annually in the U.S.; that can generously season enough sandwiches to wrap 12 times around the world (according to the website horseradish.org).

And with good reason. Nutritionally, horseradish has it all.

This less-popular cruciferous vegetable (cousin to broccoli, kale, and cauliflower) provides ten times more of the anti-cancer glucosinolates than broccoli, plus various plant compounds that protect against DNA cell damage, while the oils in horseradish are both antibacterial and antimicrobial. There are enzymes in horseradish that aid in digestion, elimination, and the health of the gallbladder which then helps with the removal of toxins. Horseradish also supplies vitamin C, zinc, potassium, magnesium, and folates, all nutrients your immune system needs to keep humming along.

If you’re ready to season a sub, concoct a knock-your-socks-off dip, or an unforgettable salad dressing, grab a fresh root from your local farmer’s market or natural foods market  (horseradish root is sometimes confused with celery root, although horseradish is larger and more angular. When in doubt, ask). Spring is the best time to buy.

Use a vegetable peeler to strip away the tough outer skin. The “meat” inside should be smooth and white. You’ll need a sharp chef’s knife to chop the root into small chunks. Add 2 cups of root to a food processor with 4 Tbs (or more to taste) of white or rice wine vinegar, plus 2 teaspoons of salt. Note: A little sugar is optional. Also optional, a tablespoon or two of plain yogurt to make the resulting product even smoother. Process until fluffy.

Process as above, but add finely grated fresh carrot and chopped cilantro before processing.

Add a bunch of fresh mint and 1-2 tablespoons of chopped fresh rosemary to the basic recipe.

OTHER USES FOR HORSERADISH

Can’t find a root? Don’t throw in the towel. You don’t have to start from scratch. You can just buy a jar of the plain old prepared horseradish (read labels. Avoid products with anything more than salt and vinegar added) and take it from there. Less work, pretty much the same benefits.

1 comment on “The Spicy Benefits of Horseradish: A Root to Root For”