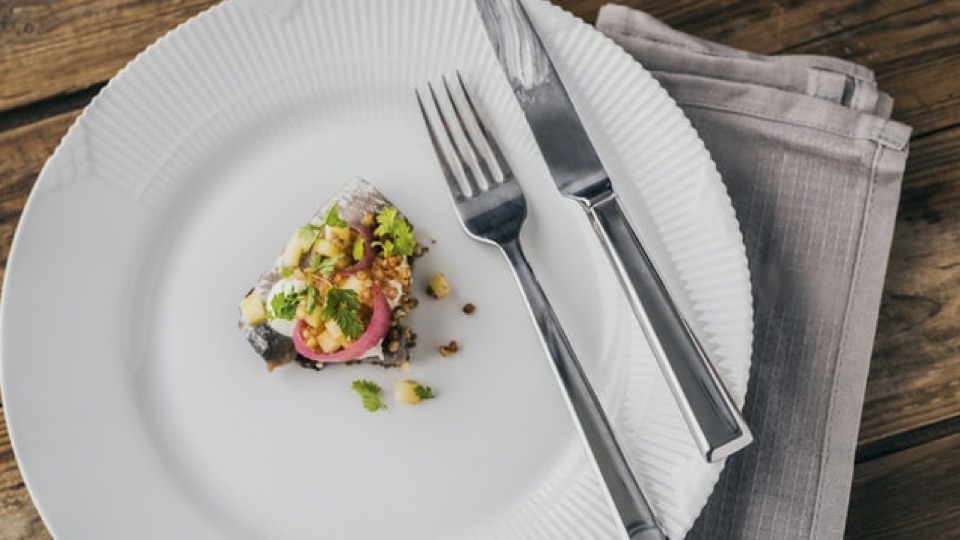 Professionals in the fairly new science of Neurogastronomy say that all our senses are in subtle and complex ways wired to our brains– the traffic control center responsible for sending those yum or yuck text messages to the tongue– each time you sit down at the dinner table (or stand up at the kitchen sink) for a full meal or a quick snack.

And those messages, gastroneurologists, say, are influenced by much more than a growling stomach. We’re influenced to like or dislike foods by all sorts of things–the size and color of the dinner plate or soup bowl, or the music playing in the background. Even long-forgotten memories all impact the dining experience. In other words, you may not be exercising the free will you think when choosing between that baked salmon or the teriyaki tofu.  Add the right song or the wrong view out the window and your choices may shift even more .

Countless factors come into play to affect how our overworked brains perceive and interpret flavors, aromas, appearance, and textures of food. “Our sensory and motor appreciation of what we have in our mouth is created by the brain,” says Yale neuroscientist Gordon M. Shepard who is considered the father of gastroneurology (a term he coined ). It’s become the name of a book in 2012 and spawned the International Society of Neurogastronomy symposium which encourages dialogue among chefs, anthropologists, behavioral psychologists, clinical neuroscientists, biochemists food technologists, and others.

Not that Neurogastronomy is exactly new. Flavor creation is right there in any innovative chef’s wheelhouse.  Molecular gastronomy, a close precursor, studies flavor from a purely chemical perspective, to understand how different ingredients and cooking reactions change the way food molecules interact. Interesting and often whimsical dishes have emerged from this approach.  Such as smoked beer, foam curry, and arugula spaghetti.

But Neurogastronomy looks at flavor from a different angle: It considers how those molecules are interpreted in the brain and how they influence brain regions that control emotion, memories, food preferences, cravings, appetite and memories. Many food experiences are intertwined with memory. Consider Marcel Proust’s iconic tale of the madeleine’s ability to evoke deep palpable nostalgia years later.

Consider how even your hearing gets involved in shaping a dining experience. It appears that you may not love that cheeseburger for the reasons you think.  Studies in this new field of Neurogastronomy have shown that our perception of sweet and salty, for example, can be skewed by sound. For example, what seems salty when listening to say Lynrd Skynyrd may seem underseasoned when your headphones are feeding you Dave Matthews or Franz Liszt.

And in tests by Yale neurobiologists, a candy bar tasted “sweeter ” alongside piano music while jelly seemed sourer alongside brass. Music can change the sensory experience.

Moving from your dining ears to your dining eyes: at the Crossmodal Research Lab at Oxford University, researchers found that white plates made food taste sweeter, and food eaten with heavy cutlery got higher ratings from diners.  Further, when the eater used a lighter spoon, creamy desserts like ordinary yogurt seemed denser and more luxurious.

Or consider the part your nose plays.

Here’s what you (probably) didn’t know about the mechanics of smell.  Take a sip of hot coffee and notice what happens. As we drink, the brain recognizes a smell as a spatial pattern, and from it in concert with the other senses, constructs the perception of flavor.

Aromas in fact are what give many foods their distinct flavor.  A cheeseburger or umami-rich miso-flavored veggie burger, you can smell at 50 paces. If you bite into it, some of its molecules bind to taste receptors on your tongue—giving you some of the 5 basic sensations of sweet, salty, sour, bitter, or umami—while other, more volatile odor molecules travel up the back of your mouth into your nose. This so-called “retronasal” smell signal combines with taste signals in the brain’s frontal cortex to give you a complex sensation of flavor. None of this mastery is easy or simple.  There are more than 400 smell receptors in the human nose. Each is capable of responding to multiple different odor molecules, and each type of odorant can also activate multiple receptors. Researchers have found taste receptors in the lungs, intestines, and pancreas, which they suspect encode information about metabolism. And recently, it appears that we humans have receptors for tastes other than the five basic ones; such as fat and calcium.

Even your hands have a hand in how food tastes because of the neural wiring of the dominant versus the non-dominant hand. Our dominant hand is more fluent; signals from it are processed more easily, says food psychologist Charles Spence, a professor of experimental psychology at Oxford University, who has studied the links between dexterity and taste. In practice, this means wine in a glass held in your right hand may taste smoother and less acidic than one held in your left, Or vice versa.

This is good news. Or at least it can be, say neuroscientists.

What if the steamed spinach at the end of that fork could taste as good as the greasy, salty French fry?  And conversely, what if that taco chip could be made to appear less appetizing, saving you untold calories and guilt?

The Atlanta-based neurogastronomy chef Taria Camrino says it’s possible to consciously mix and layer ingredients in ways that will help trigger certain emotions. The taste has to rest on the palate in a particular way, the smell has to layer over the food and it has to remind someone of an experience, she says. Different ingredients’ textures and temperatures, the color of the plate or bowl they’re presented on, and the ambiance they’re presented with have all been found to influence how we perceive food flavors.

Most of us are unaware of this symphony of effects until we contract a cold and find that dulled senses make everything taste bland and uninteresting. This, say neuroscientists, has implications for new ways of improving the quality of life for patients with Alzheimer’s disease, Parkinson’s, epilepsy, stroke, and traumatic brain injury, COVID 19 as well as for those undergoing cancer treatment. All these conditions often degrade the senses of smell or taste.  In America, more than 13 million people suffer from some form of olfactory dysfunction, according to a National Health and Nutrition Examination Survey (NHANES).

In these instances, Neurogastronomy-trained chefs can create personalized dishes based on details about how chemotherapy may have affected patients’ ability to produce saliva or swallow. And insights about textures and other factors, like pungency, may still be able to trigger some sensations to help patients regain the desire to eat.

On the upside for those of us with less serious mealtime issues,  Neurogastronomy  is working on ways to help food taste better and help us who struggle with eating disorders, obesity, or plain old portion control.

It appears that inborn taste preferences are not fixed. Researchers have demonstrated that childhood preferences for salty and sugary foods decline with age. In adults, it can also decrease through repeated exposure to less salty and sweet foods. It’s also possible to shift preferences from fatty foods to less fatty foods. (Interestingly. sweet and bitter preferences are more resistant to modification).

There’s plenty of work ahead in improving diets on personal, cellular, and even genetic levels.

But keep your knife and fork ((and white plate) at the ready and stay tuned.

Photo by Mads Eneqvist on Unsplash

1 comment on “Mind Over Platter: The Science of Neurogastronomy”